Have you heard of a word “Cool Japan”?

According to NHK TV program, it means “from fashion, anime, games, and food, various cultures that the Japanese take for granted are being accepted as cool and trendy by foreigners.”

Just as described, this program introduces many different kinds of Japanese things, culture, phrases, philosophies, and so on. What’s interesting about this program is that they focus on each theme through foreigner’s perspective.

This is good for those who are interested in learning Japanese culture, and it is also good for the Japanese people to know how the world is seeing Japan. 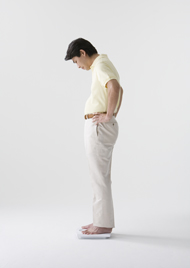 The way the stomach detects and tells our brains how full we are becomes damaged in obese people but does not return to normal once they lose weight, according to new research from the University of Adelaide.
Researchers believe this could be a key reason why most people who lose weight on a diet eventually put that weight back on.
In laboratory studies, University of Adelaide PhD student Stephen Kentish investigated the impact of a high-fat diet on the gut’s ability to signal fullness, and whether those changes revert back to normal by losing weight.
The results, published in the International Journal of Obesity, show that the nerves in the stomach that signal fullness to the brain appear to be desensitized after long-term consumption of a high-fat diet.
“The stomach’s nerve response does not return to normal upon return to a normal diet. This means you would need to eat more food before you felt the same degree of fullness as a healthy individual,” says study leader Associate Professor Amanda Page from the University’s Nerve-Gut Research Laboratory.
“A hormone in the body, leptin, known to regulate food intake, can also change the sensitivity of the nerves in the stomach that signal fullness. In normal conditions, leptin acts to stop food intake. However, in the stomach in high-fat diet induced obesity, leptin further desensitizes the nerves that detect fullness.
“These two mechanisms combined mean that obese people need to eat more to feel full, which in turn continues their cycle of obesity.”
Associate Professor Page says the results have “very strong implications for obese people, those trying to lose weight, and those who are trying to maintain their weight loss”.
“Unfortunately, our results show that the nerves in the stomach remain desensitized to fullness after weight loss has been achieved,” she says.
Associate Professor Page says they’re not yet sure whether this effect is permanent or just long-lasting.
“We know that only about 5% of people on diets are able to maintain their weight loss, and that most people who’ve been on a diet put all of that weight back on within two years,” she says.
“More research is needed to determine how long the effect lasts, and whether there is any way – chemical or otherwise – to trick the stomach into resetting itself to normal.” 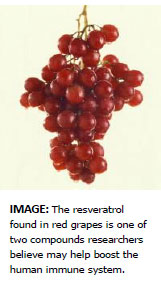 CORVALLIS, Ore. – In an analysis of 446 compounds for their the ability to boost the innate immune system in humans, researchers in the Linus Pauling Institute at Oregon State University discovered just two that stood out from the crowd – the resveratrol found in red grapes and a compound called pterostilbene from blueberries.

Both of these compounds, which are called stilbenoids, worked in synergy with vitamin D and had a significant impact in raising the expression of the human cathelicidin antimicrobial peptide, or CAMP gene, that is involved in immune function.

The findings were made in laboratory cell cultures and do not prove that similar results would occur as a result of dietary intake, the scientists said, but do add more interest to the potential of some foods to improve the immune response.

The research was published today in Molecular Nutrition and Food Research, in studies supported by the National Institutes of Health.

“Out of a study of hundreds of compounds, just these two popped right out,” said Adrian Gombart, an LPI principal investigator and associate professor in the OSU College of Science.
“Their synergy with vitamin D to increase CAMP gene expression was significant and intriguing. It’s a pretty interesting interaction.”

Resveratrol has been the subject of dozens of studies for a range of possible benefits, from improving cardiovascular health to fighting cancer and reducing inflammation. This research is the first to show a clear synergy with vitamin D that increased CAMP expression by several times, scientists said.

The CAMP gene itself is also the subject of much study, as it has been shown to play a key role in the “innate” immune system, or the body’s first line of defense and ability to combat bacterial infection. The innate immune response is especially important as many antibiotics increasingly lose their effectiveness.

A strong link has been established between adequate vitamin D levels and the function of the CAMP gene, and the new research suggests that certain other compounds may play a role as well. 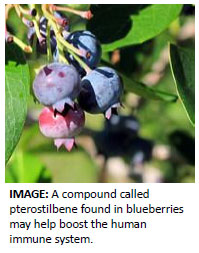 Stilbenoids are compounds produced by plants to fight infections, and in human biology appear to affect some of the signaling pathways that allow vitamin D to do its job, researchers said. It appears that combining these compounds with vitamin D has considerably more biological impact than any of them would separately.

Continued research could lead to a better understanding of how diet and nutrition affect immune function, and possibly lead to the development of therapeutically useful natural compounds that could boost the innate immune response, the researchers said in their report.

Despite the interest in compounds such as resveratrol and pterostilbene, their bioavailability remains a question, the researchers said. Some applications that may evolve could be with topical use to improve barrier defense in wounds or infections, they said.

The regulation of the CAMP gene by vitamin D was discovered by Gombart, and researchers are still learning more about how it and other compounds affect immune function. The unique biological pathways involved are found in only two groups of animals – humans and non-human primates. Their importance in the immune response could be one reason those pathways have survived through millions of years of separate evolution of these species 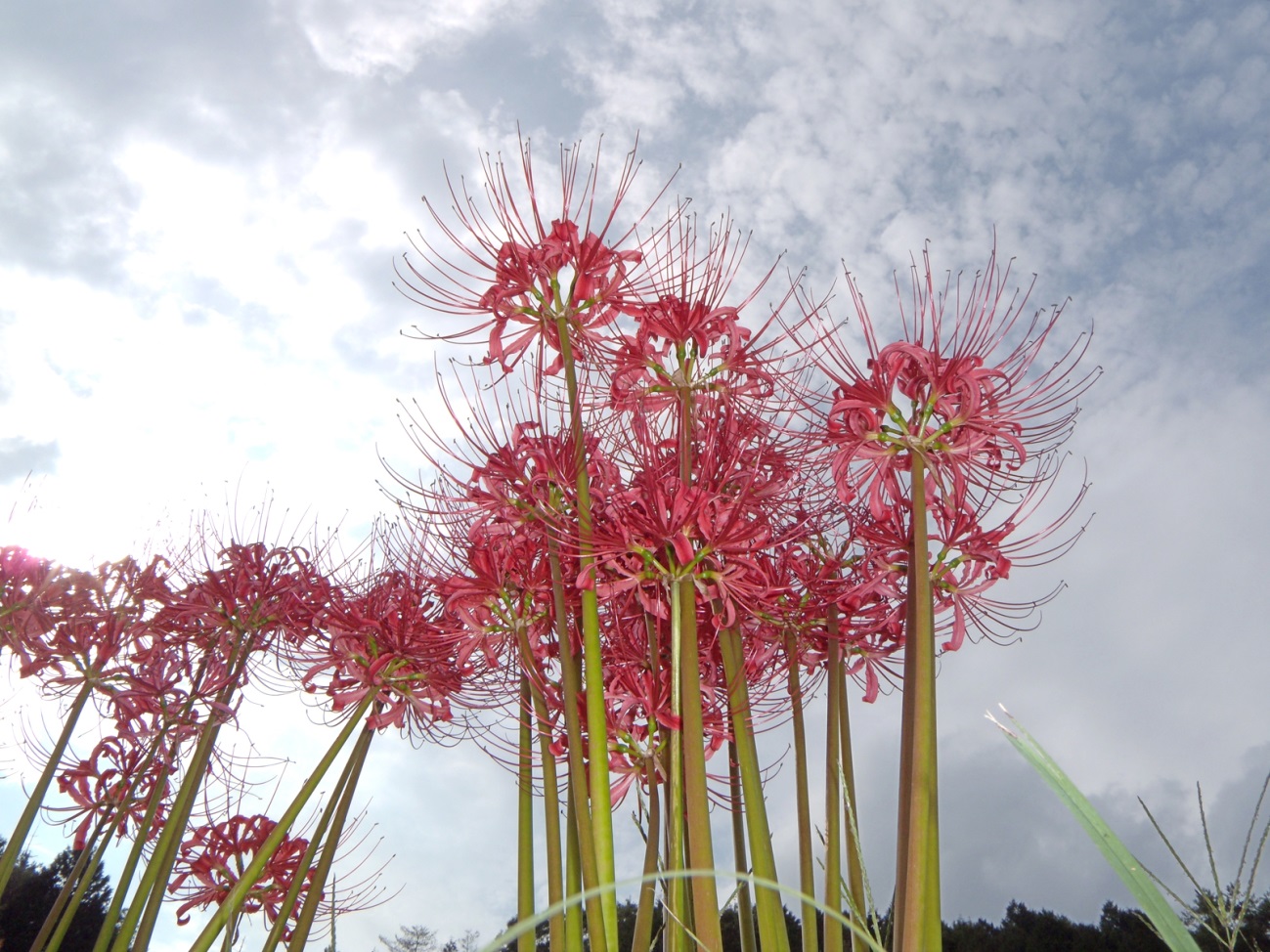 Posted on The Japan News by The Yomiuri Shimbun
September 22, 2013 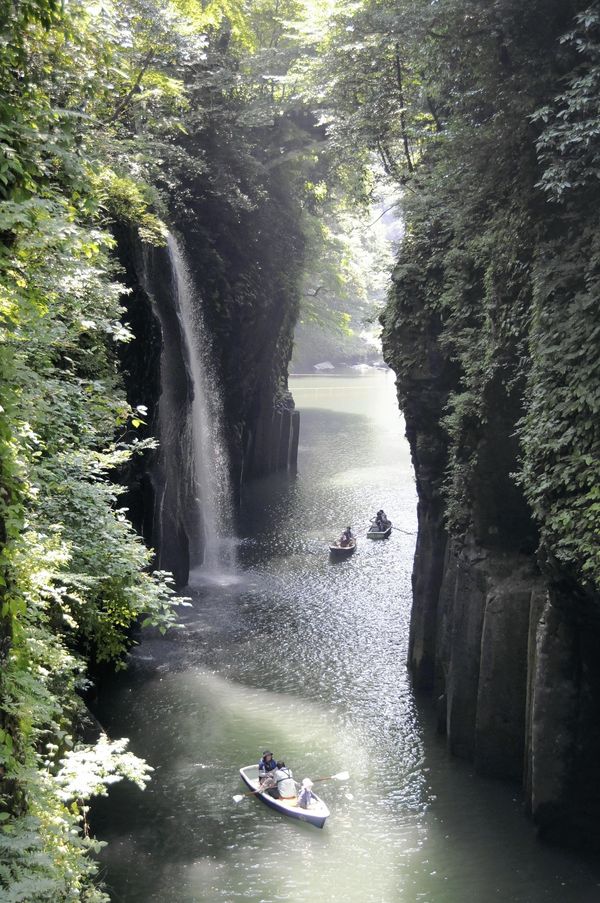 Visitors row boats through the Takachiho Gorge. The Manai Waterfall is the top tourist spot. Sunlight shines though the dim gorge in the daytime.
* * * * * * * *
Check the original article to find out more about this beautiful scene!
http://the-japan-news.com/news/article/0000548967 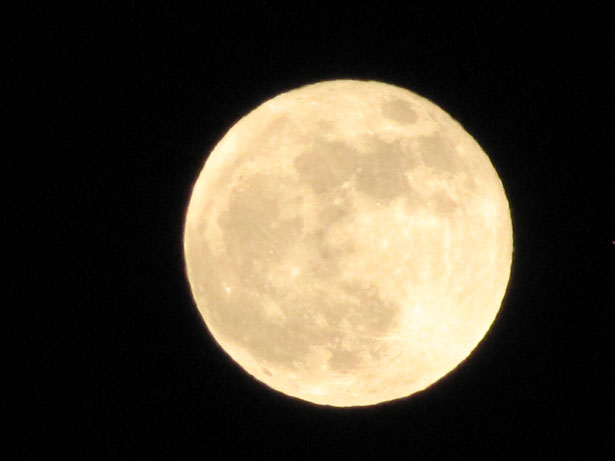 Were you able to see “The Harvest Moon?”

“The Harvest Moon” appears on August 15th of lunar calendar. (It fell on September 19th this year.) Literally expressed in Japanese Kanji characters, written as “the moon in the middle of autumn,” it is one of the customs from ancient China that people set up an occasion to view the moon on the night exactly halfway of autumn, July through September on lunar calendar. Since autumn is the season of harvests, it is said that people regarded the moon as a God and expressed their gratitude for a rich crop. It is said that this custom started because people in the ancient times were always aware of and never failed to show gratitude for what they were given by the nature.

When viewing the harvest moon, we place traditional offerings, rice dumplings and Japanese pampas grass in the place where the moon can be seen clearly. Rice dumplings are made from steamed rice, kneaded into small balls which to resemble the moon. The numbers of dumplings to offer also have traditional rules: 12 as to the total numbers of the full moon appeared throughout the year (13 in leap year), or 15 as to refer the fifteenth night (the full moon takes place on the 15th day of the month).

Viewing the harvest moon is called “Otsukimi” and this custom has been passed on to the present days. Many shrines in Japan hold moon viewing events and enjoy reading haiku or playing traditional ancient musical instruments. The harvest moon is not always the full moon, but fortunately this year, we were able to see the beautiful full moon. (It will be in 2021 when we can see the full moon on the night of the harvest moon next.) 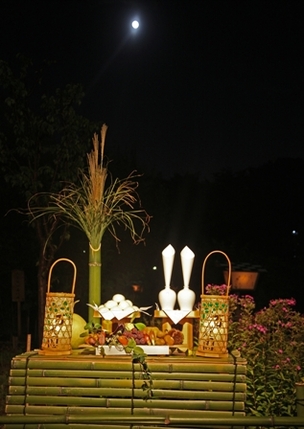 Unless you are a farmer, you may not enjoy the moon viewing for the original purpose.
But why not taking a little break between your busy day and appreciate the beautiful moon in cool evening wind of autumn. 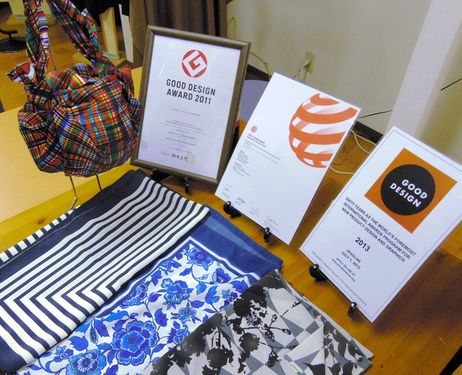 The Nagare “furoshiki” has won design awards in the United States,
Germany and Japan. (Mamoru Nagaya)

KIRYU, Gunma Prefecture–A super water-resistant “furoshiki,” or traditional Japanese cloth used to wrap things, is proving to be a hit with the folks who hand out good design awards.

The Nagare furoshiki is manufactured and sold by textile dyeing company Asakura Senpu Co. The furoshiki has such high water-repellant qualities that it can be used to even carry liquids.

The Nagare recently won the Red Dot Design Award in Germany. It has also won good design awards in Japan and the United States.

Company officials hope the high appraisal of their product in three major markets will help push domestic and overseas sales.

The Red Dot Design Award was established in 1955 and is internationally recognized.

The citation for the Nagare said the traditional wrapping material had an extremely water-repellant quality.

Asakura Senpu developed its own technology to come up with the Nagare and began selling the furoshiki in 2006. In developing the product, Asakura Senpu was trying to move away from being only a subcontractor for other companies. 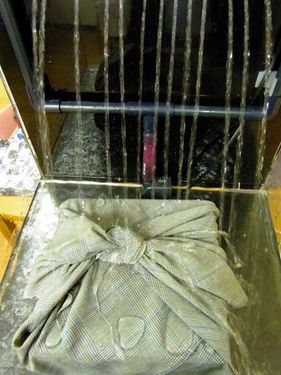 Before the earthquake and tsunami disaster in 2011, sales averaged 100 a month. They then spiked to more than 10 times that figure. In the last fiscal year, the company sold a record 16,000 furoshiki.

The Nagare is available at about 20 outlets around Japan, mostly in the Kanto and Tohoku regions. The company plans to expand its sales network to western Japan. It has also begun offering the Nagare on TV shopping channels. Leading department stores have inquired about selling the product.

While most customers have been in their 50s to 70s, there has been a sharp increase in those in their 30s and 40s who do not normally use furoshiki.

Because the water-repellant quality led many first-time users of furoshiki to purchase the item, the company has distributed pamphlets that show how to wrap bottles, books, lunch boxes and other items.

The most popular version measures 96 centimeters square, which is slightly larger than ordinary furoshiki. Some customers have used that furoshiki as a shawl or bag. For that reason, company officials are thinking about expanding the product line with even larger furoshiki.

They are also thinking about exporting the Nagare in line with the government’s efforts to promote the overseas sales of traditional Japanese products as part of its “Cool Japan” strategy.

The company has initially targeted China through its participation in a trade fair in Shanghai. It will also look at moving into Western markets since the Nagare has now won design awards in Europe and the United States. 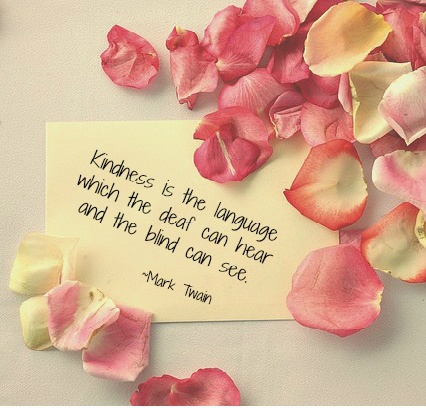 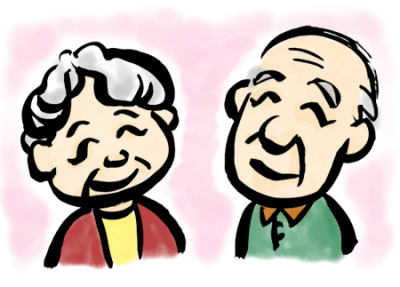 Respect for the Aged Day, “Keiro no hi” is a national holiday,
celebrated on the third Monday in September.

It is the day to show our respect and gratitude for the elderly
in the family and the community. It is mostly common for family to get together
and give special presents for the grandparents to wish them for longer lives.