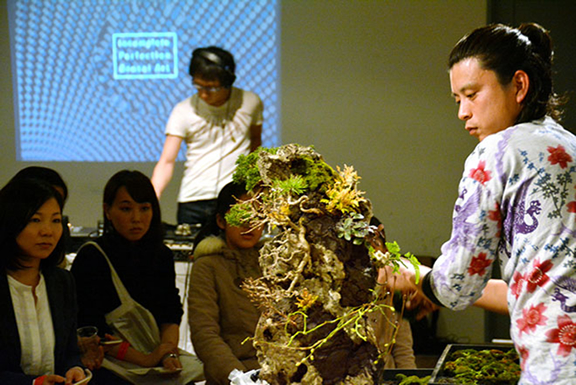 May 4, 2016 at 11:15 JST
Masashi Hirao, right, a bonsai artist, performs his show to music played by a disc jockey, background, in Tokyo’s Meguro Ward in February. (Kai Uchida)

With the World Bonsai Convention set to come home to Japan in 2017 for the first time in 28 years, the traditional art form is perfectly positioned for a re-evaluation.

While many Japanese people see growing miniature potted plants as a hobby for elderly men, it’s a different story overseas, where all ages enjoy bonsai in ways specific to each place.

Industry figures in Japan have high expectations for the eighth world convention, to be held in Saitama from April 27-30, 2017.

“Bonsai is a nonverbal art, like music,” said Edoardo Rossi, a bonsai artist from Italy, at the International Bonsai Symposium held this February in Tokyo. “It is a universal language.”

Rossi, who participated as a panelist in the run-up event of the quadrennial convention, has been engaged in bonsai cultivation for 30 years.

The 55-year-old studied at a bonsai school opened by a Japanese in Italy for eight years, and is now teaching 150 students in their teens to their 80s the skills and techniques to grow artistic trees and shrubs.

Rossi said he and his students often use rosemary, olive trees and other plants grown in the Mediterranean region to create their works.

“My focus is on improving my inner self through the process of growing bonsai,” said Rossi.

In the United States and Europe, many young people take care of their own bonsai pieces. Unlike in Japan, those young artists take full advantage of Internet services, such as taking online courses to study how to prune and raise trees, as well as interacting with each other on Facebook.

The culture of bonsai cultivation is said to have spread outside Japan after bonsai works went on display during the 1964 Tokyo Olympics and the 1970 Osaka Expo.

Artists from the Omiya Bonsai Village in Saitama, which bonsai nurseries formed about 90 years ago, devoted themselves to introducing the Japanese traditional art to other parts of the world.

They welcomed many followers and visitors from overseas, and also traveled outside Japan to offer lessons and training.

Saburo Kato, who died at age 92 in 2008, was the leading light in the efforts to spread bonsai abroad.

His motto of “peace-oriented diplomacy based on bonsai” was embodied by the first World Bonsai Convention, which was held in Omiya (present-day Saitama) in 1989 and drew more than 700 people from 30 countries across the globe.

Through demonstrations and workshops, visitors to the convention forged deep connections, as Kato had hoped.

Kato had also been looking to establish a center to exhibit bonsai works alongside related documents and materials. His dream eventually came true in 2010, when the Omiya Bonsai Art Museum was opened in Saitama.

Masashi Hirao, 35, came to the Omiya Bonsai Village in 2003 after being impressed by the beauty of Japanese-style gardens during his school days. Hirao said he is Kato’s “last disciple.”

According to Hirao, his master, then aged 88, frequently said that bonsai art “has to expand to overseas.”

Taking his cue from Kato, Hirao has toured more than 30 countries to provide lessons and demonstrations, and finally came up with the idea of performing with disc jockeys and live music at bars and nightclubs.

His “bonsai performance” combines the art form with music and alcohol, and has attracted interest from many foreigners who have never viewed bonsai before.

In February this year in Tokyo’s Meguro Ward, Hirao performed his first bonsai show in Japan.

About 80 people–many of them in their 20s and 30s–visited the venue to see Hirao’s performance in which he rhythmically planted trees in hollows in a stone, using soil for horticulture and wires, to music played by a disc jockey.

“Even people who had not shown an interest in bonsai enjoyed my show,” said Hirao. “I will make efforts to make the upcoming convention a place where people from Japan and overseas can form bonds with one another and enjoy the experience together.”

The world convention has been held in the United States, Germany and elsewhere, and will eventually return to Saitama.

Kato’s eldest son, Hatsuji, 73, who heads the eighth convention’s executive committee, said he hopes the upcoming event will help boost the popularity of bonsai among the Japanese.

“I hope young people in Japan will change their attitudes to bonsai through exchanges with people from around the world,” he said. “I’m pinning my hopes on this opportunity.”

(This article was written by Aiko Masuda and Kai Uchida.)

May 4, 2016 at 13:25 JST
Carp streamers in front of Tokyo Tower in the capital’s Minato Ward, right, and those in Higashi-Shirahige Park near Tokyo Skytree, both in Sumida Ward. (Ryo Ikeda)

Hundreds of brightly colored carp-shaped banners are fluttering in the breeze at two Tokyo landmarks to mark Children’s Day on May 5.

The front of the entrance of Tokyo Tower in Minato Ward is adorned with 333 carp streamers, continuing a tradition that began seven years ago to celebrate the national holiday.

In Sumida Ward, spectators are being dazzled by 450 carp streamers not far from Tokyo Skytree, a tourist attraction that rises 634 meters and opened in 2012.

The steamers are located in the Tokyo metropolitan Higashi-Shirahige Park, about 2 kilometers north of Tokyo Skytree.

A volunteer organization started the carp banner event about 20 years ago.

“We are aiming to come up with 634 carp streamers one day to match the height of Tokyo Skytree,” said Koya Sakai, a 73-year-old representative of the organization.

The event will be held through May 20. 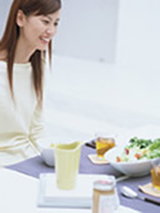 When one eats may be as important as what one eats. New research at the Weizmann Institute of Science and in Germany, which recently appeared in the Proceedings of the National Academy of Sciences (PNAS), suggests that the cells’ power plants – the mitochondria – are highly regulated by the body’s biological, or circadian, clocks. This may help explain why people who sleep and eat out of phase with their circadian clocks are at higher risk of developing obesity, diabetes and metabolic syndrome.

Dr. Gad Asher of the Weizmann Institute’s Biomolecular Sciences Department, who led the study, explains that circadian clocks, which are found in living things from bacteria to flies and humans, control our rhythms of sleep, activity, eating and metabolism. “In a sense,” he says, “it’s like a daily calendar, telling the body what to expect, so it can prepare for the future and operate optimally.”

Dr. Adi Neufeld-Cohen, of Asher’s group, in collaboration with Dr. Maria S. Robles and Prof. Matthias Mann of the Max Planck Institute of Biochemistry in Germany, looked for circadian changes in the mitochondria that, by creating peaks and dips in the cells’ energy levels, would also help regulate their day-night cycles. The group identified and quantified hundreds of mitochondrial proteins, finding that the quantities of a whopping 40% peak once a day. Further research identified the proteins making up the mitochondrial circadian clock that regulates these activities. Surprisingly, most of the circadian proteins in the mitochondria peaked four hours into the daylight part of the cycle (in mice, which are active at night).

Among the essential proteins the researchers uncovered was a key enzyme that determines the rate of sugar use for energy production. This protein reaches its maximal amount four hours into daylight, suggesting that the mitochondria’s capacity for burning sugar peaks around this time, as well. To check, the researchers provided mitochondria with sugar and found that at around hour four, respiration and glucose utilization were indeed at their highest. They also found that the protein responsible for the entry of fatty acids into the mitochondria only peaks at the eighteenth hour and, again, tests showed fat processing was optimal at the same time.

In mice with a genetic mutation that interferes with their overall biological clocks, the amounts of these proteins did not change over the course of the day, and the decomposition activity of fats and sugars was steady throughout.

“These findings support previous findings in our lab in which we showed that if mice eat only at night, when they are active, rather than throughout the day and night, they will eat the same amount of calories but their liver lipid levels will be 50% lower,” says Asher. “In other words, the outcome depends not only on what you eat but also on when you eat it. If we could be more aware of the timing of our cellular activities, we might be able to take advantage of various nutrients in a healthier way.” 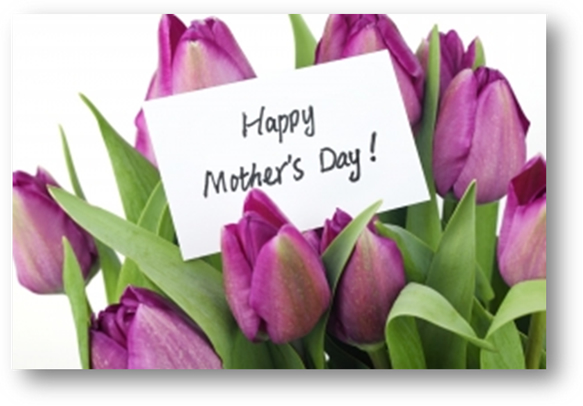