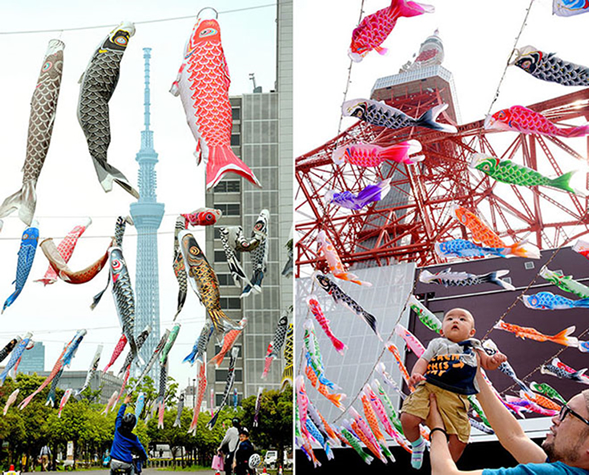 May 4, 2016 at 13:25 JST
Carp streamers in front of Tokyo Tower in the capital’s Minato Ward, right, and those in Higashi-Shirahige Park near Tokyo Skytree, both in Sumida Ward. (Ryo Ikeda)

Hundreds of brightly colored carp-shaped banners are fluttering in the breeze at two Tokyo landmarks to mark Children’s Day on May 5.

The front of the entrance of Tokyo Tower in Minato Ward is adorned with 333 carp streamers, continuing a tradition that began seven years ago to celebrate the national holiday.

In Sumida Ward, spectators are being dazzled by 450 carp streamers not far from Tokyo Skytree, a tourist attraction that rises 634 meters and opened in 2012.

The steamers are located in the Tokyo metropolitan Higashi-Shirahige Park, about 2 kilometers north of Tokyo Skytree.

A volunteer organization started the carp banner event about 20 years ago.

“We are aiming to come up with 634 carp streamers one day to match the height of Tokyo Skytree,” said Koya Sakai, a 73-year-old representative of the organization.

The event will be held through May 20.