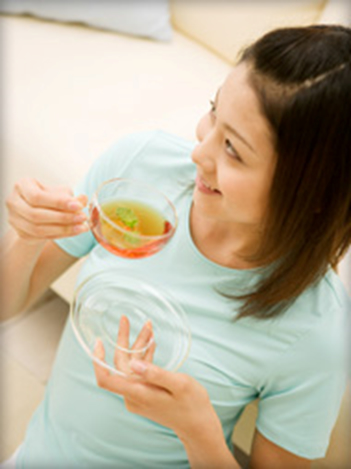 Tea and citrus fruits and juices are associated with a lower risk of developing ovarian cancer, according to new research from the University of East Anglia (UEA).

Research published today reveals that women who consume foods containing flavonols and flavanones (both subclasses of dietary flavonoids) significantly decrease their risk of developing epithelial ovarian cancer, the fifth-leading cause of cancer death among women.

The research team studied the dietary habits of 171,940 women aged between 25 and 55 for more than three decades.

The team found that those who consumed food and drinks high in flavonols (found in tea, red wine, apples and grapes) and flavanones (found in citrus fruit and juices) were less likely to develop the disease.

Ovarian cancer affects more than 6,500 women in the UK each year. In the United States, about 20,000 women are diagnosed with ovarian cancer each year.

Prof Aedin Cassidy, from the Department of Nutrition at UEA’s Norwich Medical School, led the study. She said: “This is the first large-scale study looking into whether habitual intake of different flavonoids can reduce the risk of epithelial ovarian cancer.

“We found that women who consume foods high in two sub-groups of powerful substances called flavonoids – flavonols and flavanones – had a significantly lower risk of developing epithelial ovarian cancer.

“The main sources of these compounds include tea and citrus fruits and juices, which are readily incorporated into the diet, suggesting that simple changes in food intake could have an impact on reducing ovarian cancer risk.

“In particular, just a couple of cups of black tea every day was associated with a 31 per cent reduction in risk.”

The research was the first to comprehensively examine the six major flavonoid subclasses present in the normal diet with ovarian cancer risk, and the first to investigate the impact of polymers and anthocyanins.

The study was led by Prof Cassidy and Prof Shelley Tworoger, from the Brigham and Women’s Hospital and Harvard Medical School. Data was derived from the Nurses’ Health Study.

‘Intake of dietary flavonoids and risk of epithelial ovarian cancer’ is published in the American Journal of Clinical Nutrition on Nov. 1, 2014. 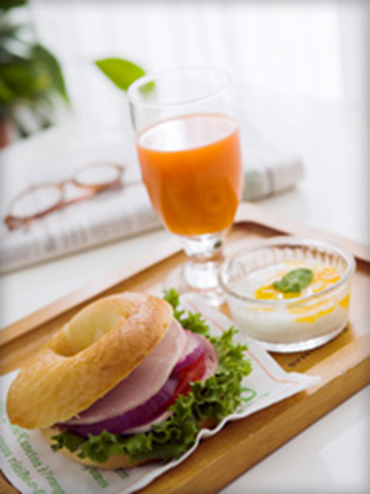 A high intake of yogurt has been found to be associated with a lower risk of developing type 2 diabetes, according to research published in open access journal BMC Medicine. This highlights the importance of having yogurt as part of a healthy diet.

Type 2 diabetes is a chronic condition that occurs when the body doesn’t produce enough insulin, or the body’s cells develop resistance to insulin. There is an increased risk of developing it if a relative has the condition or if an individual has an unhealthy lifestyle. Approximately 366 million people are affected by type 2 diabetes worldwide and it is estimated this will increase to 552 million people by 2030, which puts pressure on global healthcare systems.

Researchers from Harvard School of Public Health pooled the results of three prospective cohort studies that followed the medical history and lifestyle habits of health professionals. These studies were the Health Professionals’ Follow-up Study (HFPS), which included 51,529 US male dentists, pharmacists, vets, osteopathic physicians and podiatrists, aged from 40 to 75 years; Nurses’ Health Study (NHS), which began in 1976, and followed 121,700 female US nurses aged from 30 to 55 years; and Nurses’ Health Study II (NHS II), which followed 116,671 female US nurses aged from 25 to 42 years beginning in the year 1989.

At the beginning of each cohort study, participants completed a questionnaire to gather baseline information on lifestyle and occurrence of chronic disease. Participants were then followed up every two years with a follow-up rate of more than 90 per cent. Participants were excluded if they had diabetes, cardiovascular disease or cancer at baseline. People were also excluded if they did not include any information about dairy consumption. This left a total of 41,497 participants from HPFS, 67,138 from NHS and 85,884 from NHS II.

Mu Chen, the study’s lead author from Harvard School of Public Health, says: “Our study benefited from having such a large sample size, high rates of follow up and repeated assessment of dietary and lifestyle factors.”

Within the three cohorts 15,156 cases of type 2 diabetes were identified during the follow-up period. The researchers found that the total dairy consumption had no association with the risk of developing type 2 diabetes. They then looked at consumption of individual dairy products, such as skimmed milk, cheese, whole milk and yogurt. When adjusting for chronic disease risk factors such as age and BMI as well as dietary factors, it was found that high consumption of yogurt was associated with a lower risk of developing type 2 diabetes.

The authors then conducted a meta-analysis, incorporating their results and other published studies, up to March 2013, that investigated the association between dairy products and type 2 diabetes. This found that consumption of one 28g serving of yogurt per day was associated with an 18 per cent lower risk of type 2 diabetes.

Previous research has suggested calcium, magnesium, or specific fatty acids present in dairy products may lower the risk of type 2 diabetes. It has been shown that probiotic bacteria found in yogurt improves fat profiles and antioxidant status in people with type 2 diabetes and the researchers suggest this could have a risk-lowering effect in developing the condition. To confirm this observation, and investigate whether or not yogurt is causal in the lowering of risk, randomized controlled trials are needed.

Senior researcher on the study Frank Hu, Harvard School of Public Health, says: “We found that higher intake of yogurt is associated with a reduced risk of type 2 diabetes, whereas other dairy foods and consumption of total dairy did not show this association. The consistent findings for yogurt suggest that it can be incorporated into a healthy dietary pattern.” 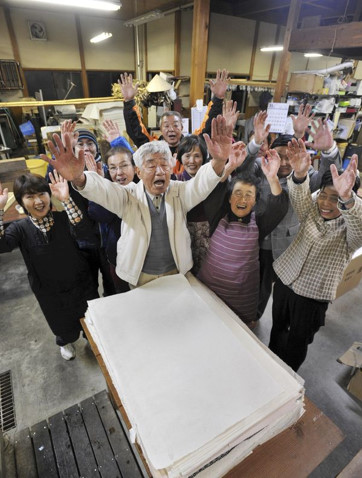 Teizo Takano, a chairman of an association of Hosokawashi craftsmen,
and other related people give a banzai cheer at a paper studio in Higashichichibu, Saitama Prefecture, on Thursday.

At a meeting of its intergovernmental committee in Paris, UNESCO said the craftsmanship is passed from generation to generation in families and local communities as a cultural symbol of the residents in certain areas and strengthens social ties. The decision follows last year’s recognition of washoku traditional Japanese cuisine, indicating high international regard for Japanese traditional culture.

The registered products are Sekishubanshi from Hamada, Shimane Prefecture; Honminoshi from Mino, Gifu Prefecture; and Hosokawashi from Ogawa and Higashichichibu, both in Saitama Prefecture.

All 24 nations represented on the intergovernmental committee approved the recommendation by a UNESCO subsidiary body last month to add washi to the list. The committee appreciated the tradition of washi, stating that local people are proud of the tradition and are planning such preservation activities as skill training and hands-on lessons at schools.

Japan has so far been awarded 22 intangible cultural heritage registrations, including washoku, kabuki, noh and Yukitsumugi silk fabric production techniques. The latest registration does not change the total number of Japan’s heritage listings as Sekishubanshi was already designated as an intangible culture heritage in 2009. Its heritage status will be registered again with the two other washi products. 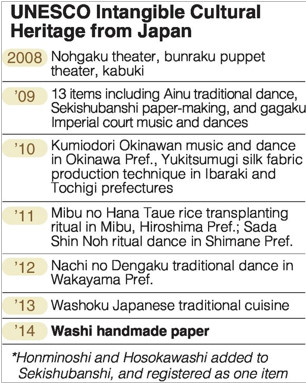 The government tried to have Honminoshi added to the heritage list by itself in 2011, but the intergovernmental committee deferred a decision that year, saying the paper product is similar to Sekishubanshi. The government therefore changed its plan to aim at the overall registration of the three products, adding Hosokawashi as a new candidate. In Japan, they are designated as important intangible cultural heritage and preservation groups exist. The government submitted a proposal to UNESCO in March last year.

The Yomiuri Shimbun:
The government emphasized the paper-making traditional techniques, which date back to the eighth century, explaining the unique process in which paper is made from kozo mulberry pulp, and paper solution is uniformly spread on a hinged mold called sugeta.

Source: The Japan Times by The Yomiuri Shimbun
http://the-japan-news.com/news/article/0001750455