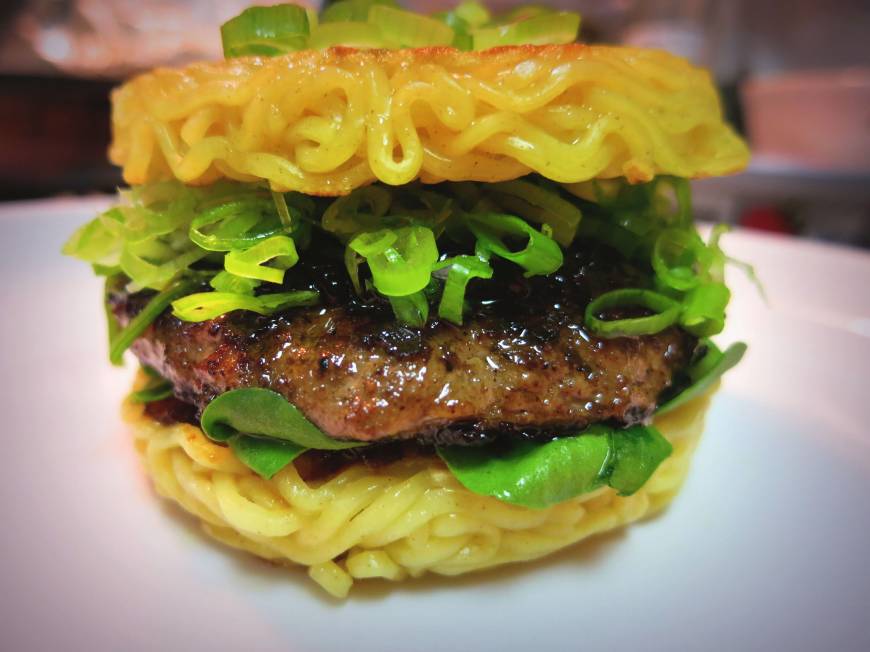 Who needs buns: Keizo Shimamoto and his ramen burger, which he serves to long lines of hungry diners in New York. | COURTESY OF KEIZO SHIMAMOTO

It’s too early to tell if Aug. 3, 2013, will go down as a landmark date in culinary history, but for the hundreds of people who lined up that morning at a food fair in Brooklyn, New York, the excitement was palpable. The crowds had braved steady rain for a chance to try the ramen burger, an East-meets-West concoction whose arrival was accompanied by breathless coverage in both old media and new. Although the buzz has yet to reach the level that greets a new opening from the likes of Danny Meyer or David Chang, the debut of the ramen burger was widely hailed as the foodie event of the summer.

All of this is as unlikely as it seems. Few cultures are as associated with a single food as America is with hamburgers, a dish that for more than a century has been much loved and little changed. The ramen burger offers a reinterpretation of the classic as Asian-inflected soul food, with noodles in place of the buns, a soy-based sauce instead of ketchup, and arugula and scallions standing in for lettuce, tomatoes and onions.

Keizo Shimamoto, the chef who dreamed up the dish, has a background as interesting as his creation. A 35-year-old second-generation Japanese-American, Shimamoto ditched a career in finance and moved to Japan to learn the craft of making ramen. I met him last year at popular Tokyo noodle shop Bassanova, where the California native had apprenticed as a cook and risen to the level of manager. We were there to discuss a tie-up between The Japan Times and Yahoo! Japan, which was running a promotion to drum up interest in noodles by enlisting foreigners as “Ramen Ambassadors.”

Shimamoto was a natural choice for the role of envoy. His blog, Go Ramen!, a daily chronicle of travels through noodle shops and ramen culture, had become an essential resource for the burgeoning international community of noodle fetishists. After his riches-to-rags story came to the attention of director Michael McAteer, Shimamoto found himself the subject of a documentary, “Ramen Dreams,” which took the prize for best short at the 2012 NYC Food Film Festival. The exposure opened up contacts in the industry and allowed him to perfect the ramen burger, a project that had occupied him for years.

“If I hadn’t gone to study ramen in Japan, I would never have been able to think about making the (dish),” Shimamoto told me last weekend from New York, where he had just finished his third stint at Smorgasburg, an al fresco assembly of food stalls in Brooklyn’s Williamsburg district. Although space for venders is limited and entry to the market highly competitive, Shimamoto has earned his place: The first weekend’s run of 150 burgers sold out in 20 minutes, and subsequent batches of 300 met a similarly ravenous response.

Interest in the ramen burger has been fueled by an overwhelming — and largely unintentional — media campaign. Perhaps the most galvanizing event for Shimamoto was an early August appearance on ABC’s popular TV show “Good Morning America,” during which he cooked ramen burgers in the studio for the program’s hosts and for other guests. In its wake came a flurry of coverage in prominent media outlets, among them Village Voice, CNBC, National Public Radio, Fox News, The New York Post, Eater and The Daily Beast. A profile of Shimamoto on BuzzFeed ran under the headline, “The Ramen Burger Could Save Us All.”

Shimamoto would be the first to admit that he didn’t invent the dish that’s making him famous: That distinction goes to Japanese chefs, and even fast-food chain Lotteria debuted a ramen burger in May. But his effort stands out in terms of substance and quality. He makes his patties with 75-percent lean USDA prime beef, and his noodles, sourced from a leading U.S. ramen maker, are fresh, not instant. The only thing he’s not forthcoming about is his method for congealing the ramen into bun-like consistency, which he describes as a “trade secret.” (A bevy of chefs on YouTube inspired by Shimamoto bind the noodles with egg.)

Shimamoto has seen enough of life to realize the importance of capitalizing on the momentum he’s developed. And the momentum is significant. “We’ve been getting offers every day from people who want to invest or manage events for us,” he told me. “The response and demand from people around the country and even around the world is amazing.” His plans for the near term involve continuing at Smorgasburg, but he’s also searching for a bricks-and-mortar location and wants to share his creation with food enthusiasts in other cities.

“I consider (my) ramen burger to be Japanese-American. Just like me. It’s not fusion food. It’s a food born in America that happens to combine two different cultures and makes them exist as one. The perfect symbol of America.”
_ _ _ _ _ _ _ _ _ _ _ _