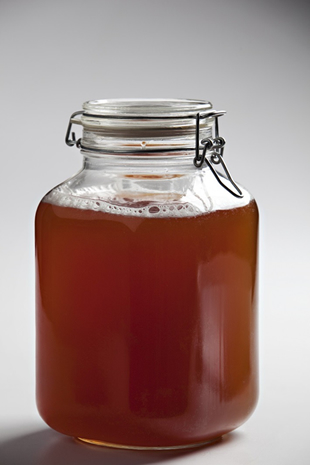 Some over-the-top claims have been made about the benefits of kombucha, but its probiotics probably are good for gut health. (Deb Lindsey/For the Washington Post
By Ellie Krieger October 29, 2014

The growth of kombucha is fascinating, both as a hot trend in the beverage aisle and in the biological sense, since it is brewed with a live, expanding bacterial culture. The drink, which originates in Asia, has been around for centuries and has long been popular with alternative-health folk. But after I overheard a group of fashion editors buzzing about it and my 12-year-old daughter begged me to buy her some, I knew it had hit the mainstream.

What is kombucha?
Kombucha is a fermented tea made by adding a culture of bacteria and yeast to a solution of tea, sugar and sometimes fruit juice and other flavorings. It’s often referred to as “mushroom-tea” because during the brewing process the bacteria and yeast grow into a mass that resembles a mushroom cap.

The drink has a slight effervescence and sweet-tart flavor. It often has small remnants of the bacteria mix floating in it, which sounds unappealing but is not much different from finding some sediment in your wine. Kombucha is highly acidic, contains sugar, B vitamins and antioxidants, as well as some alcohol that results from the fermentation process. It has about 30 calories per eight ounces (mainly from the sugar), which is considerably less than other soft drinks.

You can buy bottled kombucha, both pasteurized and unpasteurized, in various flavors everywhere from health-food stores to supermarkets. The drinks have exploded on the market, with Whole Foods Magazine reporting projected sales reaching $500 million by 2015.

You can also brew your own by either buying a culture starter called a “mother” or getting one from a friend who has culture that has produced offshoots, and fermenting it in a clean jar for seven to 14 days. As with any other home brewing it is important that you research the proper technique and do it under highly sanitary conditions.

Is it good for you?
Kombucha has been touted as a magic elixir, curing everything from digestion problems to arthritis and cancer, but it has also been maligned as a potentially toxic alcoholic beverage. As with most things, the truth of it lies in the middle.

Most of the big curative claims about kombucha are unfounded: there have been just a few animal studies on it, and no solid research has been done on people. But some health benefits are likely since kombucha, when raw or unpasteurized, is rich in probiotics, good gut bacteria (like those in yogurt) that have been shown to boost immunity and overall health.

The downside is that kombucha’s probiotics do not survive the pasteurization process, and drinking it unpasteurized, if it was not produced in sanitary conditions, may pose a food safety threat, especially for those who are pregnant or have compromised immune systems. Some of the reported side effects of excessive and/or contaminated kombucha consumption include stomach upset, acidosis, allergic reactions to the molds that can develop during fermentation, and toxicity from heavy metals from home-brewing in ceramic pots.

Regarding the alcohol content, the government requires that a beverage must have less than 0.5 percent alcohol (a trace amount) if it is to be sold as a nonalcoholic drink. Bottled kombucha must comply with that standard or risk being pulled off the shelf. But depending on how they are made, home brews can vary in alcohol content and approach the amount that is in beer.

The bottom line
Kombucha is not a magic potion, but it is a potentially healthful, flavorful drink that is relatively low in calories and sugar. As with any food or drink, it is wise not to overdo it but to enjoy it in moderation.

Only drink homemade kombucha if you are certain it has been properly brewed, and opt for a reputable, commercial brand when buying it bottled. To be on the safe side, children, pregnant women and those with compromised immune systems should drink only the pasteurized kind.